Normalization is a feature available throughout the TrackMan platforms

This feature can be found in the TrackMan Performance Studio (TPS) software as well as the iPhone and iPad app.

The purpose of Normalization is to provide the user and golfer standardized information about the golf shot’s carry, side, and total.

TrackMan measures every shot’s actual trajectory from launch until landing; whereas, Normalization provides information on the trajectory assuming calm conditions at any altitude and temperature input by the user.

Normalization tells you what would have happened if there was no wind at a certain altitude and temperature.

This feature is extremely valuable for gapping, fitting, and finding a golfer’s “normalized” distances.

Let’s look at some behind the scenes information on how Normalization works.

Introduction To Lift And Drag

Imagine you are sitting in a car on top of a train and it is a perfect day outside. There is not a breath of wind.

The car and the train are not moving. You hold your hand out the window and you feel nothing. Then the train speeds up to 150 mph.

The force you are feeling is drag.
 

Now, the driver of the car starts to pick up speed as it drives on top of the train towards the front.

As the car picks up speed you again begin to feel increasing pressure on your hand.

The car levels out at 50 mph as it races to the front of the train. (It’sa long train so you have nothing to be worried about.)
Once the car reaches a constant speed you feel a constant pressure again.

Lastly, as you are moving you slowly rotate your hand between pointing forwards and pointing down.

The faster that you are moving the more lift and drag your hand will feel. 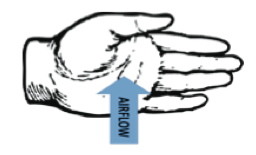 This exercise should give you a basic understanding of lift and drag. Along with gravity, these are the three forces acting upon the golf ball as it flies through the air. 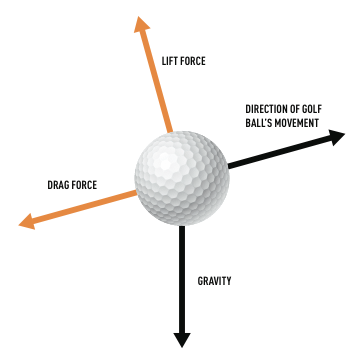 How Do Lift And Drag Create Normalization?

Every golf ball has its own aerodynamic model. Depending on dimple pattern, size, shape, etc., each golf ball will react a little differently (have different lift and drag) depending on how fast the air is moving around it and how fast it is spinning.

TrackMan creates this aerodynamic model for the golf ball under calm conditions. A robot or air cannon is used to slowly change the ball speed and spin rate. Then data is collected for all possible combinations. This way TrackMan knows how a golf ball will fly under calm conditions for any golfer and/or shot type.

TrackMan will always measure the actual trajectory realtime. Then TrackMan can use the baseline aerodynamic model as well as the launch data (ball speed, launch angle, and spin rate) to determine how the ball would have flown under calm conditions; the same conditions that TrackMan tested the ball under.

What Other Lessons Can Be Learned?

The train and car example is the same as hitting into a headwind. Using points one and three from above, we now know that this situation will create more drag and more lift. That is why you hit it shorter into a headwind and it is also why you see the ball “balloon” more into a headwind.

The additional airflow generated by the wind creates additional lift. The ball DOES NOT spin more when hit into a headwind.
As mentioned in point two, a higher spin rate does generate more lift. This is likely the reason many golfers believe that their golf ball spins more in a headwind than calm conditions.

Assume that the wind is zero for two (almost) identical shots. The only difference is that one shot has 2500 rpm and the other has 5000 rpm. The shot with 5000 rpm will create more lift which will make the ball rise more, apex higher, land steeper, and in most cases carry shorter.

Next, let’s hit the above shot with 2500 rpm into a headwind. The headwind will also create lift which will make the ball perform similar to the shot with 5000 rpm under calm conditions. Even though the two shots may look similar, the headwind did not change the spin rate of 2500 rpm.

The following tables look at how wind affects carry, max height, and land angle for a stock 6 iron on the PGA and LPGA Tour.
HW represents a headwind and TW represents a tailwind. We will look at the PGA TOUR data first. 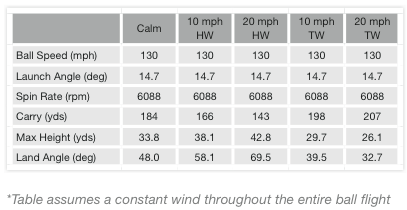 Notice how max height increases with shots into the wind and decreases downwind. Also, look at how the landing angle is affected. Not only is carry severely affected, but landing angle (bounce and roll) is also significantly affected. Shots hit into the wind will stop more quickly (or even backup); whereas, shots hit downwind will release (forward) more because of the change (flattening) in landing angle.

It can also be seen from the above table that headwinds affect distance more severely than tailwinds. The following table focuses on how these two wind directions affect carry.

At a 20 mph constant wind, a headwind hurts almost twice as much as a tailwind helps. This is something to keep in mind when you are playing next time! The following charts show the same data for an LPGA Tour 6 iron. 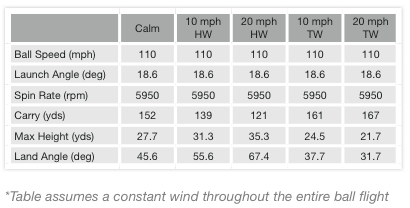 From these two tables, it is easy to see why Normalization is such an important feature for TrackMan users. Wind affects a golf shot much more than most golfers think.

The above tables can be considered extremes since it is assuming that the wind is a constant speed throughout the entire ball flight. Also, most golfers will intuitively react to the wind and change their trajectory whether they realize it or not.

This assumption is where Normalization has even more power. Normalization does not care what the wind is, whether it is gusting or swirling, whether the wind is faster above the tree line, or any other variations. Normalization will give the golfer a standardized value for how far they hit the golf ball with every club in their bag.

Playing in the wind is difficult for even the best golfers in the world. So if a golfer doesn’t know their yardages under calm conditions then calculating for wind is a complete guessing game.